Yet another lockdown in Rwanda 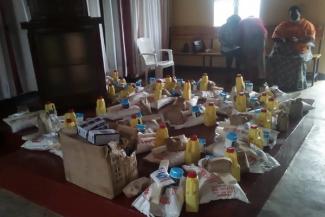 2020 in Rwanda as elsewhere has been a difficult year. As the year rolled on and the world saw Covid-19 spread from continent to continent, Africa seemed to be escaping the worst. Rwanda, especially given a population of 13 million people squeezed into a country the size of Belgium, saw very low case numbers and deaths compared to elsewhere.

The impact, particularly among the poor was hard. Families, unable to find work of any form, started going hungry. For the better off, motorbike delivery services started up to deliver groceries, but this service isn't available for everyone. With our projects suspended we have been buying food in bulk and distributing food to the families we support.

As the end of year approached, the strict mid-year restrictions had been eased and people were looking forward to some return to normality by January. The government had published new school term dates and everyone, including us, was gearing up to get school fees paid and projects restarted. Our Child Care project at Rugende which had been closed for most of the year had been told it could restart at the beginning of January.

Now that we are across new year, the picture has changed. Europe has seen two new strains of the virus which are spreading at a much faster rate than the original. It isn't clear whether the new strain has found its way into Rwanda yet but with Covid cases on the increase, the authorities are taking no risks. That new school timetable looks like it won't happen now as national transport has been suspended and people are once again restricted to their homes.

We the future so uncertain, both at home and in Rwanda, we can do no more than provide support as we are able.