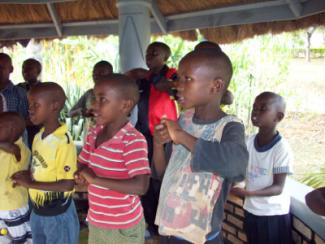 In January, sponsors from Loanhead Church sent thirteen children to school along with new uniforms, books and pencils.

The children attend a children's Saturday Church run by Marietherise Millindi. We visited them a couple of days ago to hear how they were getting on now that they are almost at the end of their first school year.

We had agreed to meet at Marietherise's house for midday, but being Africa, everyone arrived late. This was no bad thing. Marietherise had decided to cook a full meal of rice, potatoes, beans and meat which was still being prepared.

Usually the children are given a mug of porridge along with their Bible teaching but today were being given something more substantial. Some, Marietherise knew, were hungry at home. However, because the previous afternoon she had been helping us buy supplies for a family who hadn't eated for two days themselves, and because Saturday, being the last in the month, was umuganda (and shops are shut), she couldn't buy the food until just before we were due to arrive.

So when the children did eventually arrive we all sat, exchanging basic Kinyarwanda for an hour. With thirteed children who don't speak English, it was interesting. But when the food did come, it was good.

Ask any child how they are getting on at school and the answer will always be 'fine', or in Kinyarwanda, 'nbeza'. The school reports could be better, but considering that these children had not attended school before, we are not disappointed. Marietherise told of how several parents had come to her house to thank her for the change they had seen in in their children. Whatever the children are learning at school, they seem to be leading more settled lives.