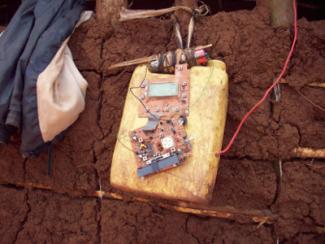 While on a visit to Steven's farm (see <a href='http://missionrwanda.net/node/460'>Progress and hope</a>) we met the team building a new fenced enclosure. As will be found anywhere in the world, these workmen had a radio playing their favourite music. The radio they were using wasn't quite as basic as a cat's whisker (look it up) but still hung there on the fence begging to be photographed.

The loudspeaker was a plastic cooking-oil bottle and did a shockingly good job. By coincidence, that is also what the batteries would do to you if you touched them. They were held together with a bit of stick. The heart of the equipment had been borrowed from a bedside alarm clock (the fascia was lying discarded in the yard). And for an aerial the builder of this wonderful piece of kit had used a simple length of wire.