From a goat to a house 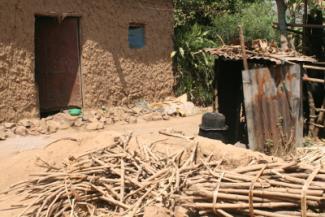 Three years ago we visited the community of Rutonde for the first time. One of the first people we met was an elderly widow living on the hillside above the road to Kigali. That story can be read <a href="http://missionrwanda.net/node/24">here</a>.

This lady lived with her daughter in a house that was barely fit to accommodate anything other than livestock. The door-frame had partially collapsed. A section of one wall had fallen away and the sun shone through the gap where the corrugated-iron roof no longer met the wall. And if the sun shone through on that day, the rain would surely pour through on another. Many dwellings in Rwanda are what might euphemystically be called basic. This house needed some work to bring it up to that standard.

This week we paid a return visit to the widow and saw how much these people can accomplish with very little. When we started our children's porridge project, not long after that first visit, this widow received one of several goats which were distributed around the district.

Three years later, that goat has provided several offspring, and with careful management, sufficient income to enable the widow to build another house. The new home is simple, the walls formed from mud on a wooden frame. But it is solid, has a door that fits and a roof that is weather-tight. The house stands in its own small patch of ground where there is a toilet and cooking area. Even better, the woman still has a goat and with it the prospect of ongoing income.

Recently we found a family who had received a rabbit from the porridge project and who had bought a pig from the money they were able to save. Turning a rabbit into a pig was impressive. Turning a goat into a house is even more so and gives us real encouragement that the Rutonde project is helping people to improve their lives.