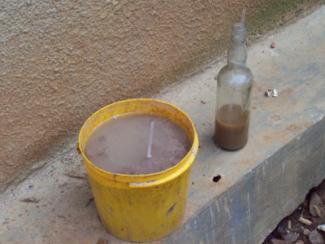 We were visiting some of the children who have been through our porridge project at Rutonde and at one house noticed a plastic pail with a bottle beside it. Each container held what can only be described as sludge which, after heavy rain, could well have been collected from a puddle in the road. Both the pail and the bottle had a straw sticking out of it.

There was much laughter as I enquired politely why the mama of the house was sitting beside a bottle of mud with a straw in it.

This is my first introduction to banana beer. A cautious sniff of the bottle tells me that whatever its contents they have a distinctly alcoholic whiff. This stuff is allegedly very potent. Whatever its strength, it is probably best drunk after dark when the contents can't be seen.