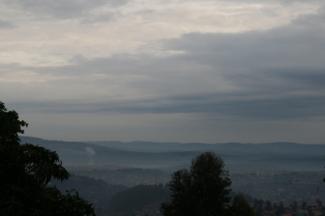 Kigali is a city of busy streets, hooting vehicles and chattering people. For me, answering my mobile is a real challenge. I can’t hear what is being said on the other end for the surrounding noise. So on Thursday afternoon I was amazed to find a short period of tranquility.

Gavin had left me at the CPR offices while he was meeting the widows’ groups at Nyamirambo. We were to meet up five hours later for another meeting reasonably close by. I needed to buy some Kinyarwanda Bible material for the INN club and knew both the Scripture Union and the Bible Society had premises nearby. It wouldn’t be too far to walk. Most of the route is along a dual carraigeway. Having made a false start and headed in the wrong direction, I retraced my steps and not far from CPR, I found a footpath which followed the road through a grassy area lined with trees and colourful shrubs. It certainly lifted my spirits and made me feel that God is good. I had been thinking for several weeks that there wasn’t really anywhere pleasant to walk in the city and pass a few quiet moments.

After calling in at a Christian book-shop I had noticed en-route, and buying a booklet which would be ideal for using with the pre-school children, I arrived at the Scripture Union centre. I had expected a good sized shop where I could browse at my leisure and take my pick from a selection of suitable material as I would do at home. Instead the bookshop was housed in a small room with samples of the stock in glass cabinets. Most of it was in English or French and I couldn’t see what I was looking for. There were two women in the room, one of whom turned out to be SU’s children’s co-ordinater. She was very helpful and I managed to find a couple of small books of Bible stories, readings and activities which we will be able to use. I also discovered they are running a three day residential camp this coming week and she asked me if I would like to attend a couple of the sessions. It will be good to see how children’s ministry is carried out here and hopefully pick up some useful ideas to take back to the INN club. After purchasing a childrens Bible which had been recommended to me, and a few booklets from The Bible Society I headed back to meet Gavin.

As I walked along the earth road towards the main road I saw a couple of groups of boys squatted near the edge playing marbles. After a conversation using a mixture of their limited English and my very poor French I discovered they call the game boobons and that they thought I wanted to give them money for them. A few weeks ago, someone described to me a game the children play in Rwanda which sounded like marbles, but this was the first time I had seen it being played.