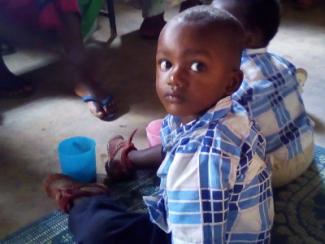 Today is the first visit of this trip to our porridge project in Rutonde. The first task, early in the morning is to get to Nyababogo and the central bus station which feeds all points north, south and east. The easy, if risky way to get there is by moto-taxi which cuts through the morning traffic with ease. The only rule of the road here is not to touch anything else, especially if it moving. Overtaking is permitted, even if the vehicle being overtaken is itself overtaking something else. Usually there is a bus involved which doesn't leave much room for error. The moto does its job without incident.

The constant theme in Kigali is change. The last time we were here, Rutonde had been given its first bus service. Before that the only way to get out there was by expensive white taxi. Back then, the bus was the traditional African mutatu. This time, we have a free upgrade to coach-class and even have to pay using the now ubiquitous plastic bus pass. The biggest comfort with these buses is that you get a seat to yourself. Aside from that, there aren't many other comforts.

The road to Rutonde is still being upgraded. Large Chinese machines scrape the surface ready for tarmac to be laid. But this is slow progress by Rwandan standards and there is still no tarmac in sight. The road was being scraped this time last year and in the meantime half an airport has been built to the east of the city. The road is wet after the recent heavy rains and the bus is forced to ease slowly through deep muddy puddles.

At Rutonde the porridge children have gathered with their mothers in the church hall waiting for the daily brew. There are two groups - from Rutonde itself and the neighbouring district of Rimwe. The children are patient and well behaved. The porridge, made each day by ladies in the church, is served from a large plastic bin.

When the children have taken their fill, the women are given a chance to say something. Several ladies take their turns to stand and speak about what the porridge project has done for them. What is gratifying is that for the first time, the women appear to have made the connection between porridge, rabbits and goats. The porridge meets the immediate need of hunger and sometimes malnutrition. The rabbits provide a way to start generating ongoing income. The goats provide longer-term capital.

Together, the porridge, rabbits and goats seem to have been successful in lifting a small community out of helplessness. The benefit mentioned most was that families are able to purchase Mutuelle health insurance. This brings its own benefits in that a visit to the doctor can be expensive, especially if the condition is serious. Malaria kills, but it kills more of those who can't afford to have it treated. Three years ago, none of the porridge women had Mutuelle. Now all of them do.

With income, and energy, the people here are using their resources more effectively, thanks to the local Pastor Zacharie. He has been showing them how to micro-irrigate crops during the dry season. Life here revolves around surviving the two long dry seasons each year and making the most of the rains in between. Rutonde has hardly become wealthy but it is discernably healthier and less impoverished than five years ago when we first arrived.