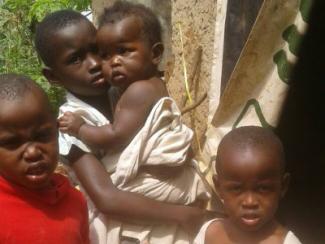 Melissa is one of our sponsored children being sent to school by Loanhead Church. Her's was one of the houses damaged in the recent rains which swept across East Central Africa.

For much of the year, rainfall is sparse and even during the rainy season usually does little more than cause local inconvenience. But in two out of the past three years however, Rwanda has experienced particularly heavy rains resulting in 200 deaths across the country since January.

While newer buildings in the city are now being built to something like European standards, much of the population in rural areas and villages around the towns live in basic mud-walled dwellings. These houses have no foundations and are often built on soil which is solid enough when dry but which turns to sludge in the rain.

An added problem in many areas are the steep hillsides which cover much of Rwanda. It is not known as the Land of a Thousand Hills for nothing. When the rains come, the wet soil slides down the hillside taking houses with it.

People don't live in this style of house out of choice. They have little in the world and often the only piece of furniture to be found will be a low bench to sit on. Bedding is laid out on the ground. Melissa shares her house with six brothers and sisters as well as their parents. The building is barely four or five meters square.

Melissa and her family have been relatively fortunate. The house has slumped to one side but has not collapsed altogether. The local community have been able to help with repairs but from the images we have been sent, the best they have been able to do is make the building habitable.