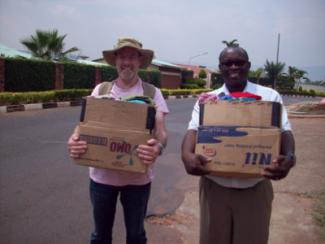 The women of Loanhead Parish Church have continued to knit jumpers and hats for some of the poorest babies of Rwanda. On Saturday pastor Francis of the Anglican church met us at Scripture Union to collect the knitting on behalf of Embrace Rwanda, the Canadian charity with which the church partners.

Francis told us a little about the projects in which they are involved. These projects are based around health and nutrition for women and children in rural areas of the country. One project is called CMAM (Chickens and Mushrooms against Malnutrition). The families being helped are given spores to develop a mushroom garden, and three chickens from which they can get eggs. The produce can be sold at the local market.

Each family also donates one egg per hen, per day into a fund, called 'Egg for a Child'. These eggs are being used in the local nursery school where the women are being taught how to use them to improve the nutrition of their young children. The poorest children at the nursery are being sponsored through Embrace Rwanda.

We accompanied Francis, with his two boxes of fish and chip jumpers. to the bus which would take him back to the Embrace Rwanda offices in the Remera area of Kigali.