A calf and its legacy 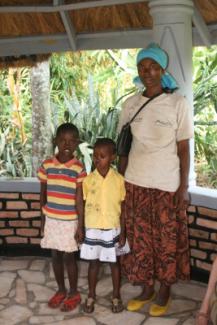 Marie-Therese originally comes from Tanzania but has settled in Kigali with her husband Jean-Pierre. She runs a Saturday church for local children and uses that as a way of helping struggling local families. We are more than happy to help her.

In 2015, with funds provided by Loanhead Parish Church, we asked Marie-Therese to buy a cow. The good news last year was that the cow was expecting a calf which was born in the spring of 2016. The less good news we found on this visit was that the calf had sadly died. The seasons in this part of Africa appear to becoming ever more unpredictable. Last year's rains came late, in April, and all at once. Soil was washed away, crops were lost and in some areas, houses destroyed. One consequence was that our young calf did not survive through the summer dry period because it did not have enough to eat.

Every cloud has a silver lining. We lost a calf but gained the milk that the calf would have taken from its mother. Fresh milk is readily sold and provides useful income which has been used to help two mothers of Marie-Therese's children's group. These women were given enough money to set themselves up selling vegetables.

The fruit and vegetable women can be seen all over Kigali, usually with a woven basket or plastic basin on their heads. They take early morning buses to large markets around the city where they are able to buy their produce at reasonable prices. Back in their local villages the baskets and basins are emptied through the day. These women will not earn more than around £1 per day, but that is the difference between being able to provide a meal for their family and going hungry.

The two ladies that Marie-Therese helped were living a hand-to-mouth existence. Thanks to Loanhead Church, they have been able to find some stability and a regular income.