Wild dogs on the prowl at Ruonde 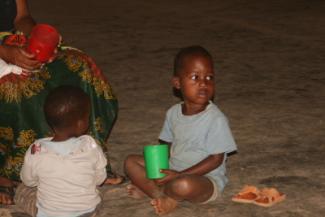 The road from Kigali to Rutonde is as dusty as ever. Trees are coated in cocoa powder and the ruts in the road force the taxi driver to move at a crawl as he carefully picks his way along the road.

The first house we visit proudly shows us the rabbit given at the end of their child's time on the porridgee programme. That rabbit has produced two pups which will be mature enough to reproduce themselves in another month. These animals provide a source of both food and income for the family.

The project has been running for almost three years now. The goat and rabbit populations are well established and the benefits are being seen. A number of animals however have been taken by wild dogs in the local area including one of our goats and her kid. The dogs are even reported to have killed a cow.

In the church hall we meet the children currently on the porridge programme along with their mothers. The youngest is a little girl aged eighteen months, the oldest, ten years. Without their daily porridge, these children would have no other source of regular nutrition. We are hearing that after the failure of the harvest this year, it is becoming increasingly difficult to buy fresh vegetables.

Heading back through the dust and the bumps to the city, it is easy to see how precarious are the lives of the people in Rutonde. But given a resource to cultivate they have the means to survive.