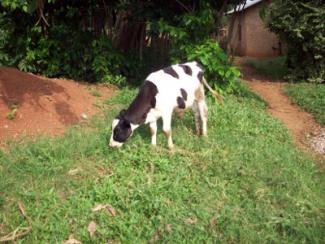 Today was meant to be different, but that is Africa. This being Saturday we had arranged to go to the outskirts of the city with Marie-Therese Millindi to visit her Saturday Church and to hear how our sponsored children and cow are fairing. These plans were thrown into disarray by an announcement yesterday that all roads in the district of Kigali where we are staying were to be closed for the day. The African Union Summit is being held at the new Kigali Conference Centre up the road.

So, effectively under lock-down, Marie-Therese has given us an update of her activities here at Scripture Union.

Last year, with the support of Loanhead Parish Church, a cow was bought, to be kept by Marie-Therese and used to support a local family. The good news is that the cow has since given birth to a calf which is now five months old. The less good news is that there has been no rainfall since April and the grass is now parched. Whereas the cow would be expected to produce around 6 litres of milk each day, it is only producing 4 litres. Half of this milk is being given to the calf the rest is being given to two new-born children, one whose mother died. Some has been sold to by maize flour to make porridge for local children.

Loanhead church have also sponsored two boys and a girl to go to school. Another to a vocational training centre to learn catering. All are doing well and the school report cards are encouraging. From milk sales, Marie Therese gave Jackson, one of the boys some money to allow him to sell salted peanuts during the school holidays. Jackson buys his stock of nuts from the market and cooks them in salted water. The dried nuts are then sold in small polythene bags. Jackson has made enough money from his summer job to be able to buy himself a new pair of shoes.

During this visit we have been discussing soap-making with Marie-Therese. With ingredients which can be bought locally, soap can be made for selling in local markets by widows who have no other way of feeding their families. We have a recipe and some instructions from Rutonde where Pastor Jean d'Amour's wife has taught the widows there. So, this is the start of another initiative. Watch this space.