Kiwangala in Uganda to Kigali 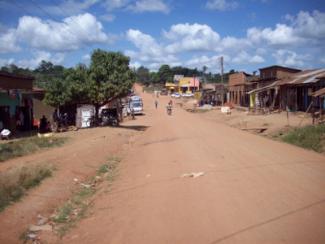 All good things must come to an end. It is time to leave the dust of Kiwangala and take a bus back into Rwanda. I have been asked to preach at the Presbyterian Church in Kigali on Sunday and leaving travel until Saturday would be cutting things a little fine.

Having seen the massive investment going into the centre of Kigali one senses disappointment, if not surprise, at the relative lack of development over the border. For the past four days I have been washing with bottled water on a concrete floor. Life is so much simpler when one doesn't have to wash behind the ears. The last rains fell over a month ago and that was the last running water Kiwangala will see until they come again.

There are signs that a few more shops have set up along the main street in the village compared to when I last visited. We know that three of the new shops belong to ladies from our widows cooperative. There is also a bicycle repair shop and another selling cycle accessories that were not there before. Even so, the road has not benefited from Chinese tarmac and white lines the way many Rwandan roads have.

Masaka, the town where I am catching the bus to Kigali, is similar. A few new shops give the place a sense of business which was muted before, yet the roads are still scarred by shell-holes which are a remnant of fighting during the Idi Amin era.

The bus station at Masaka doubles as the Total filling station. Away from the town centre, out on the main Mbarara Road, passengers sit patiently in the shade of a tree waiting for a coach to come along. A couple of women have set up their stalls - small tables - selling cooked food and mangos. A stork comically saunters around the area scavenging for anything it can find. In the heat of the rising sun, nothing moves very quickly.

My bus is run by the same Jaguar Executive Coaches that brought me here. This one is more cramped and a good deal older. We are taking the back door into Rwanda, over the hills to follow the Tanzania border before cutting south and into Rwanda at Kagitumba. This is the longer route and as we stop at each small settlement approaching the border, more passengers get on until people are standing from one end of the bus to the other.

It takes nine hours to get as far as Remera bus station on the eastern side of Kigali. Another bus takes me to a bed, running water and a shower. Even if the shower is cold, it is good to be back. I have a weekend to wash my clothes and myself before visits to Kibungo and Kinamba school next week.