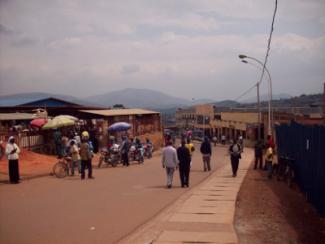 We are on the move again. For two days we have taken a coach excursion into the deep south of Rwanda to Butare. This is partly sightseeing and partly business to visit Tharcisse Gatwa, one of the Mission Rwanda trustees.

The sky is overcast as I reach Nyabugogo bus station but the air is warm and humid. At ten in the morning the place is heaving in a way that St Andrews Square isn't at any time of the day. Ticket bought, I am directed to the bus and climb aboard just in time for it to leave. That is the good news. When travelling by bus, one can arrive early, have a choice of seats and wait forever till the thing fills up. Alternatively, applying the Just in Time principle, one can have the last seat on the bus which is invariably in the aisle on a fold down affair with a broken back.

The road south climbs into the hills. Every inch of hillside is terraced and farmed. In Rwanda there is never much distance between settlements and small groups of dwellings string themselves along the route. At Muhanga we pass the large Anglican cathedral and grounds where once upon a time and when we were living in Rwanda, we unloaded  from a container a pallet of medical supplies donated by the NHS in East Lothian. The wonderful nurses who organised these surplus supplies were kind enough to include a couple of toilet bags filled with very welcome goodies like soap and shampoo. I have carried mine ever since and it is in my rucksack beside me as I write.

As we drive through the hills, loose roadside soil is held back by rough cast octagonal plant holders. Repair work to the pots is being done by local prisoners, unmissable in their orange uniforms. A significant proportion of the Rwandan male population languishes in prison and so it makes good sense to utilise the labour for public works.

Butare is not a large town. It is not particularly pretty either. Broken pavements and beggars are never far away while in the town centre, over-sized advertisements for the latest smartphone tower above bicycle repair yards and women selling potatoes. Someone once said that there are more mobile phones in Africa than there are Africans. I think they were right. Beside one mobile phone kiosk is a market. Everything inside is intimately accommodated with seamstresses sitting at their 1950's Singer sewing machines hemmed in between the dried fish and sacks of rice.

I am typing this in an hotel bar, once the home in Rwanda of the Belgian royals back in colonial days. The place is solid and grand but as a local Hilton its best days are behind it. The dance floor has seen better days and plaster hangs from the wall. The room is almost empty. The management are nothing if not honest though. There is a clear warning on the menu that the African tea which I have just ordered takes twenty minutes to prepare. We have waited a lot longer than than for an African tea and in fact, it arrives in fifteen.

African tea or chai, for the uninitiated, is made with milk and ginger. It comes in a thermos flask sufficient to fill two generously sized cups. Why it takes twenty minutes to make no-one has yet fathomed.

When I have finished my tea and uploaded this article I will head back out of town to the university, which if the decorations on the perimeter wall are to go by, is rather less down at heal than the rest of the town. Geometric African patterns in tasteful purples and pinks hint at something inside a little more sophisticated than I have seen so far. This evening and tomorrow I will spend some time there with Tharcisse and then head back to Kigali on the bus tomorrow. If I am early at the bus station, I might even get a real seat.