The changing face of Kigali 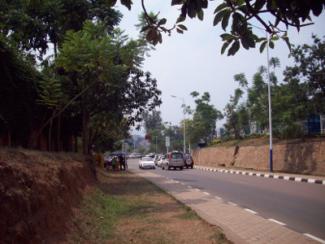 Kigali must be one of the fastest changing cities in Africa, if not the world. Even in the six months since our last visit, new developments can be seen wherever one looks. What is evident is that, whatever Kigali is developing into, it isn't an African city.

Our experience of African cities is that they are noisy, chaotic and smelly. Deisel fumes hang in the heat and traffic chaos reigns. There are probably exceptions to the generalisation though and Kigali looks like becoming one of them.

With a traffic policeman on almost every corner, order on the roads has been established. Everyone is on their best behaviour. It helps that Kigali isn't yet busy enough to create the traffic congestion which blights larger cities.

There are signs that the Kigali planners are looking beyond Africa for their ideas. Shining new buses from China have numbers to indicate their route. They even issue tickets with the fare. Because the conductor can't climb to the back of the bus, he passes the book of tickets around and everybody takes one. More than that, before the bus leaves the bus park, there is even an orderly queue instead of the rammy that has been more typical as twenty passengers scramble for three seats.

In the city centre, City Tower, a glass-covered office block has been opened with a shopping mall and an all-singing-and-dancing 3D cinema. The back streets around the city centre have a lot more shops than even a year ago. And the latest western technology has reached the equator. Everywhere the latest smart phones and fashion accessories are advertised from over-sized billboards.

For all that Kigali is trying to become a shoppers' paradise, there are some things which haven't changed. Wrist watches are frequently stopped, worn for show rather than telling the time. Another thing that hasn't changed is that despite the fibre-optic cable laid under the roads everywhere, the internet is still as slow as ever.