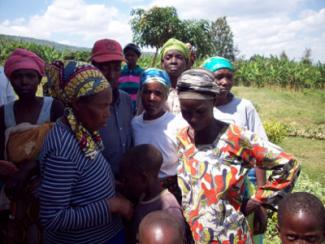 We are in for a long hot day today. The rain of last week seems to have gone and the heat is more like a real Rwandan dry season. Pastor Immaculee and I meet at Nyabugogo bus station to take a taxi out to Rutonde, where we have our goats and porridge project. The journey takes an hour at snails pace over rough track. The banana trees and cassava plants along the way look as though they have been dusted with cocoa powder.

At Rutonde we are met by a group of children from the project who have been waiting for us. Up the hill, outside the church building the women who have received goats are sitting in the shade.

Inside the building the women sit on benches in front of us with the children sitting together at the side. One of the elders and one of the widows group stands beside a drum which is about four feet high and two feet across. This drum is the musical accompaniment to a song which is sung to typically African rhythmic clapping.

The heat from the open windows feels like a wall heater turned up full as the women stand up in turn and tell their stories. One lady in her seventies looks after her two grandsons. The goat she was given gave birth to twins soon after, so she now considers herself prosperous. This is humbling considering what little these people have. Because of the goats and the income she has been able to derive, her two grandsons are now able to attend school.

Several other women also tell stories which share a common theme. They are grateful for the help their goats give them, but more than anything they are grateful for the porridge their children are receiving. The children are brighter and more energetic than they were before. They also have smiles which were definitely missing the last time I saw them. They are also pushing and poking each other they way children do

The porridge given to the children is a mix of maize, sugar and joja beans which seem to be the magic ingredient. The soya contains the vitamins that the children need.

Once the speeches and thanks are over we look around the church site before heading back to Kigali. A new two-room building is being constructed from mud bricks beside the church hall. They are intending to use this for storage and as a place for visitors to stay.

Our driver has been patiently waiting for us in the heat and the car is like an oven as we head back along the dirt-track. Back at Nyabugogo, Immaculee and I part company with an arrangement to meet again in a couple of weeks when we can arrange the purchase of another five goats for the widows.