A detour into Uganda 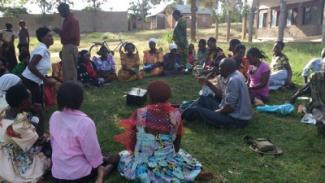 This tour around the charity's Rwanda projects has been scheduled to cover five weeks. In the middle of the tour we thought we would fit in a visit to next-door Uganda and our friends at Kiwangala. While spending some time there last year, Bronwen and Gavin set up a micro-finance fund for widows which seems to be bearing fruit. This is a long way to come without saying hello so we are spending a few days catching up on progress.

Today, in search of some of the women who have benefited from the fund we headed off into the garden. Here in rural Uganda, that roughly equates to heading off on a school geography trip into the jungle. And school geography trips were never like this. Our first stop is a tomato field situated three miles along the valley floor just above what would be swamp if there was enough of the wet season rain remaining. There isn't, and much of the ground is caked and dry. Sensibly, the tomato plants have been growing in a shaded area among banana trees and maize.

Tomatoes are the in-crop this year. Problems in Sudan to the north mean dealers are coming from there and even helping to harvest the fruit to get it up onto the nearest road. One sharp lady in the widows' group spotted the gap in the market and rented a plot of land roughly a quarter of a football pitch. With the help of her sons when they aren't at school she tends the crop several times a week. Harvesting will be soon and this lady is quietly confident of a tidy profit.

The sun is hot and the humidity high. After forcing our way through a field of six-foot maize to reach the nearest track we set off for the next widow. This next lady has used a couple of loans from the fund to start buying coffee. This is where your Asda bag of beans starts its life. She spends her time roaming the countryside looking for the black carpets of kernels laid out in front of houses hidden by banana trees and coffee bushes. These are bagged and sold on to the companies who extract and roast the beans. This lady is another entrepreneur. Last year, it seems that the Brazilian harvest failed and it says something about how small the world has become when people out in the sticks in Uganda are making decisions based on something happening out in the sticks on another continent.

There are definite signs that the project has had at least some impact on some people's lives. Last year we visited one lady who was selling dried fish. Her house could only be described as a hovel. We visited that same house again today and the difference was remarkable. Inside, the furniture was simple but clean. The tiny room was tidiness itself. Outside in front of the door, some flowering plants had been laid out in a simple garden. A depressing place to exist has been turned into a home.

The project started with fifteen women who were each allotted a sum of money. These loans were repayable and over twelve months the membership has grown to forty and the original fund has been re-lent five times. The whole group meet on Friday evenings to do their business and available funds are lent out in strict rotation. The original intention was that the loans be interest free but the women have introduced a nominal charge which must be paid as well. It is so nominal in fact that the group seem to be taking business from the local co-operative bank.

There is much to be encouraged by. Forty women represent forty families who have an income which enables them to live. Given half a chance, the women in Uganda are hard-working and enterprising. All they need is that chance.