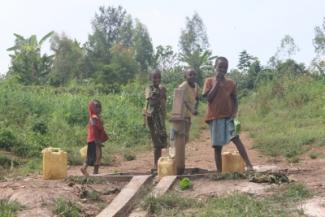 Articles in this blog have frequently mentioned poverty or families that don't eat every day. Even when talking to these people, truly understanding the life they lead is almost impossible, not least because of the uncomplaining dignity that they show.

Like anywhere else in the world, the Rwandan countryside has the poor and the not so poor. Those at the bottom of the social heap will likely live in a single room dwelling built of mud, or earth bricks, around a frame of sticks. Sometimes the house will be faced with plaster but all too often this is falling off. The roof will usually be galvanized steel sheets. There may be a simple wooden door, but just as likely, a sheet hanging across the entrance serves to offer some privacy.

At night the air can be oppressively hot and it is not unusual for families to sleep on the floor of their hut. Mattresses are a relatively expensive luxury. As long as there is water for the larvae, mosquitoes are a common pest. Even when not asleep, one is only aware of a sharp throb after the beast has gone. Malaria here is treated almost like westerners treat a bout of 'flu although it is still a killer.

On rising in the morning, running water is a convenience that isn't available to all. A group of houses may share a standpipe although there is no guarantee that it will contain water. In the countryside, water pumps have been sunk where they can reach the water table. This may still mean a considerable trek with 20 litre jerry cans to fill up.

The diet for most in Rwanda is basic and anything but varied. Rice or potatoes are often covered with a sauce made out of tomatoes or perhaps peanuts. This will constitute the only meal of the day.The budget menu item is a mash made from the root of the cassava plant which is ground into a chalk-like powder and boiled in water. The result is not unlike wallpaper paste in appearance and supposedly not a lot more nutritious. The family meal will often be prepared over a charcoal fire, sometimes outside the door of the house.

For all that life in Rwanda is simple compared to the sophistication of western wealth, there are some areas where Africa is leap-frogging ahead technologically. One example is mobile money. The mobile phone companies act as banks and allow people to carry balances on their phones. The money can be used to pay for basics like water or electricity and can be drawn as cash if necessary from one of the company's offices. For all that many people have very little, there are very few who do not possess a mobile phone, even if one with a cracked screen and a keyboard without numbers. In this country where natural resources are scant, modern technology is probably the best chance the people have of developing an economy which can sustain everyone.