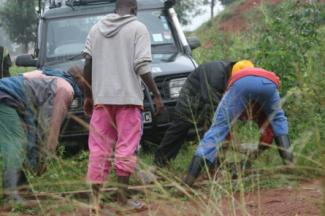 After months of wondering where our next rain was coming from the new year has brought us more wet stuff than we know what to do with. Instead of short sharp showers we are now getting long and steady downpours. This is very good for the water supply but plays havoc with the local roads.

We came out of the house the other morning to find a dump truck trying to deliver sand to the building site next door. The truck had slipped sideways down the bank and was buried axle-deep in the mud. We valiantly tried to give it a tow but had to give up the effort as futile. Besides being buried in the mud, the load of sand in the back meant she was several times our weight. Still, it was worth the try, and would have made a nice story.

With our exit blocked one way, we tried getting to the main road along a small footpath which our guard showed us. This took us so to the next dirt track but to get onto this we had to cross a drainage ditch wide and deep enough to sink a wheel. On queue, appeared some of the building site workers who had been helping to get the dump truck out of trouble, and before we knew it, a nearby pile of rocks was being used to build a bridge across our ditch. Half an hour and a couple of hundred-weight of rock later we emerge onto the track which would take us out of the village.