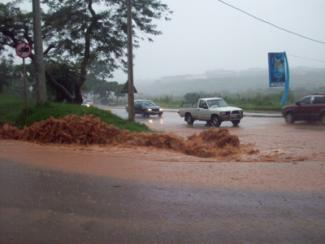 Global warming and climate change are seldom out of the news these days. In case anybody has the idea that this is a rich-world problem then the news from the middle of Africa is that it is happening here too. In recent weeks heavy rainfall and deaths have been reported in Kenya and Ethiopia. Here in Rwanda the seasons have moved and are causing havoc.

Rwanda, slightly south of the equator, has two wet and two dry seasons each year. During the dry seasons rain might not be seen for two months or more. Normally, rains would be expected in September to November, perhaps lasting into December when crops would be harvested. We are now into the second week in December and the rainfall is not only persistent with rain falling every day since we have been here, it is unusually heavy. We were caught in a downpour the other day and saw a roadside drain gushing like a geyser.

The consequences for this country are serious. Besides the inconvenience of having to negotiate flooded and damaged roads, crops have been destroyed and landslides have destroyed houses. Many people in Rwanda live in simple dwellings, often without concrete foundations and with walls of baked mud. Persistent and heavy rain eventually takes its toll.

The effect on prices in the markets is already being felt. Basics such as rice and beans have already risen in price. Last year maize flour cost RWF10,000 per kilo. Now that is RWF20,000. Part of this increase has almost certainly been because of the closure of the Ugandan border but the heavy rains will only drive prices up even higher.