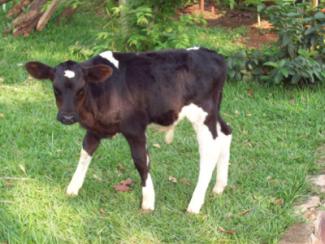 Some time back Loanhead Church purchased a cow. We have to report that after serving well the animal has now been given away to a family with no means of support and who will be able to benefit from it.

The reason for passing the cow on was increasingly vociferous complaints from the neighbours. Although the field in which the cow was being kept is perfectly adequate, the neighbour's garden isn't quite as good and lthough the paddock is surrounded by a thick containing hedge, it wasn't thick enough to stop the cow breaking through to eat the Rwandan equivalent of the neighbour's geraniums.

However, Loanhead have had their money's worth. In four years the cow has produced two calves (one pictured above) and enough milk to provide regular porridge for the group of children Loanhead are sending to school. Other milk was sold and the money used to buy a sewing machine for a widow with no means of feeding her children. That women has been making and selling bags and other crafts for some time now. Sadly, one of the calves died after heavy rains and an extended dry spell destroyed its grass. The other was given away to another family in need.

We are sure our cow will be happy in its new home and will provide valuable income for its new owners. And there are no next-door neighbours who are likely to complain.