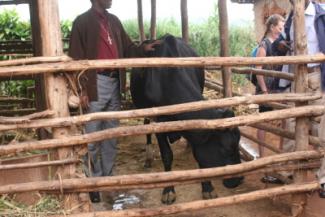 On our previous visit to Rwamagana we left some money for one of our six widows there who had fallen ill with cancer. We also bought a cow which was to be used to benefit the widow and her children. Today we are back in Rwamagana and took the opportunity to catch up with the latest news.

Our first port of call was the sick lady, and what we found was not good. She is being cared for by her daughter who has given up her studies to be with her mother. The lady has been to Kampala for treatment, but it appears that this has not been successful. She is no longer eating, just taking liquids. We talk to her briefly as she lies in bed under a single sheet in the African heat. She is very weak and in considerable pain.

Somewhat subdued, we contact Victor at the Restoration church to which the widows belong and arrange to see the cow which was bought. After some protracted Kinyarwanda between him and Steven over the mobile, we arrange to meet in town. We are in Steven's car. Victor has a motorbike taxi and leads us a mile or so out of Rwamagana to a small house by the roadside.

Behind the hedge is a smallholding with the usual cash crops and, behind the house, a cowshed complete with three cows. In the end stall is our beast. When bought, it had just given birth to a calf. It is being kept in this temporary accommodation until another cowshed closer to town can be found. The plan is to build one on ground owned by one of our widows.

The good news is that our cow is pregnant. When it gives birth, the calf will belong to the project and the milk will be sold to support the sick widow's family.