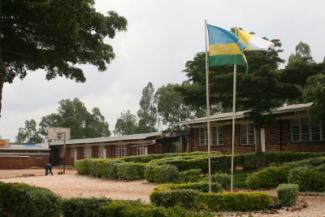 The search has started. We have four boys who have finished primary education and are now looking for a secondary school to go to. This is our opportunity to join the annual stampede to get the children into some of the secondary system's fast-disappearing places.

We expect Patric to be offered a government-assisted place. In due course, hopefully next week, we will be told what school he has been allocated to. Problem solved. Seti and Tharcien live in Nyamirambo and we have in mind a school for them which will be within traveling distance of home. That is on the list for next week.

Which leaves Kazungo. He has no parents and has been living with his older brother in Kigali. We have decided that it would be a good idea if he went to a boarding school and because he has extended family in the Rwamagana area, we should look for a school over there. So today we have come to a small school five miles to the east of Rwamagana where they still have unfilled places. The school is neat but spartan. The playground is covered in sharp stone chips which will discourage football, but the most recent S3 exam results promisingly suggest consistently high grades.

The school secretary takes our registration details. We are, to all intents and purposes, in loco parentis, and a fee has been paid. There is just one small hurdle to overcome. Young Kazungo must present himself at the school by 8am on Monday morning to sit three examination papers. He doesn't know this yet and the news, before term has even started, is unlikely to amuse him. Still, we have been monitoring his school reports so far and don't anticipate that he will have any difficulty. And the prize will be a secondary education many of his peers would give their left arm for.

We have been given a list of the equipment which Kazungo needs to take with him, assuming he is accepted. Obvious items are a school uniform and sports kit. Less obvious requirements are a matress, bucket and broom. Pyjamas are optional. Keeping the dormitory clean presumably isn't. So we have some shopping to do, which is another item on next week's list before we return home.