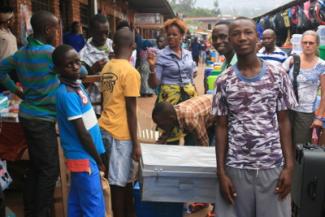 Yesterday was always going to be chaotic, energy-sapping and fractious. This was the annual jamboree known as getting the Nyamirambo children back to school. To minimise the effort, we gathered all the children together in a small cafe in Nyamirambo which offered protection from the sun and a place to do the business.

The last couple of weeks have been spent working out which children are going to what schools. The other day we found out that Patrick has been given a government-assisted place at a boarding school. Good news. Then as we gathered we heard that that Kazungo had passed the entrance exams for his school in Kyunza. That made the set. All we had to do was make it all happen.

First thing on the list was to get school fees paid. Young Mussa was despatched with a fistful of money to the local banks. Most branches at this time of year have a counter set aside especially for school fee payments. Helpfully, some schools like Kivugiza, along the road from our cafe, accept money at the school office, so that one was relatively easy. The older children are able to go and pay their fees themselves. So far, so good.

Next job was to move everybody across to the local market. For the kids moving on to boarding school we needed to buy metal boxes. These are standard security boxes in Rwanda, the size of large suitcases, and there they were, third stall on the right. We are doing well. Conveniently, right beside the boxes was a woman selling the jotters, pens and geometry sets that we needed. Half and hour later, everyone is hugging stacks of paper and the lady is looking very happy.

Then there were new school uniforms to buy. Four stalls along from the jotter stall, all the local primary school colours hung from the front of the shop. Inside, a man peddled furiously at a sewing machine while a woman cut cloth at a table. Fortunately, the secondary schools in Rwanda all use the same uniform - white shirt and Khaki trousers - so the older boys picked their own. Gakara is fifteen but has the stature of a twelve year old so the man at the sewing machine had to measure him up for a special fitting.

There is a palpable feeling in the air that we are getting close to the finish line. Last year, some of the children missed out on new school bags so we decided to complete our shopping spree with some of those. Bag shops in Rwanda are as common as mobile phone shops and there are more bags hanging in neat rows in front of bag shops than there are backs to put them on. So, spoilt for choice, Alice opted for a sensible canvass backpack. The boys went for more sporty versions with pictures of footballers and stylish stripes.

It was lunch-time before the group headed back out of the market and over to our cafe. With a sense of achievement, fanta drinks and amandazis were ordered while we took stock and made sure everyone had what they needed. The morning was certainly chaotic, it wasn't as energy-sapping as it might have been, and fractious moments were kept to a minimum. Job done for another year.