Back in the Land of a Thousand Hills 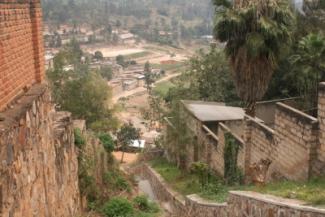 It is early morning and the city sounds strangely subdued. The sun is up and there is a threat of rain in the air but the dry ground says there has not been any heavy rain here for weeks. The lack of motorbikes and trucks may have something to do with new roads being built at the top of the hill around the brand-new Kigali Conference Centre but there could be another explanation.

Sitting in the office of Marie-Therese Millindi the news is not good. Malaria is on the increase and there have been many deaths recently around the country. Marie-Therese's husband is still recovering from a bout of the disease.

A second blow to an already impoverished country is that this year the rains arrived late and heavy, destroying crops in the process. The prices of several basic foodstuffs have doubled. The price of rice has risen as well. A few weeks ago the BBC reported that it was not only crops which had been destroyed. Heavy rains had created mudslides which had taken down houses and caused several deaths.

The news at home in recent weeks has been dominated by the European referendum with immigration becoming a hot talking point. Rwanda has its own refugee problem with large numbers coming into the country over the Burundi and Congolese borders. Many of these people have no resources to live on, yet coming to Rwanda, for them, is a better option than staying where they were.

Rwanda's growth path is clearly not a smooth one and it is the poor who are suffering.