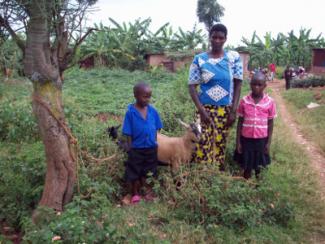 On Monday we visited Eglise Vivant at Kibungo, an hour's bus ride east of Rwamagana and not far from the Tanzanian border. The countryside is fairly hilly and we were there to visit some of the families who had received goats courtesy of Loanhead Parish Church. Compassion International also run a programme from the church and some of their staff accompanied us on out tour.

The first family, a mother with two school age children, lives a good distance from the church. We therefore needed to go by motorcycle - a new experience for Mary. Part of the journey was along tarmac road but then we turned down a mud track. Fortunately, this road was not as bumpy as the one we had travelled the last week on our visit to Rutonde.

The goat the family received around a year ago had given birth to a female kid. Now there would be two goats to breed from. The animals provide manure for the vegetables on the small piece of land around the mud house where they live and the whole family are able to eat better. When the flock increases, the woman will lend one of her nanny goats to another family so that they can breed from it. In this way many families in her community with benefit.

Back in the area closer to Eglise Vivant we were met by a church community leader who took us to visit two more families. One was a mother and daughter. The father had left them around a year ago. This family do not own their basic home and when the woman could not pay the rent she had to sell the kid that had been born several months ago. However, the nanny goat is pregnant again and due to give  birth in four months time. Her daughter is one of the children supported by Compassion International and is in her second year of primary school.

The final family we saw, a mother and small son, are both HIV positive. They share the building where they live with the woman's brother and his child. The house belongs to other family members who could ask for it back at any time. The goat they received has also given birth, to a male kid, which the woman would like to keep. Compassion International support this family with extra food which helps to ensure the anti-retro viral drugs they take work.

Before leaving Kibungo we left money from Loanhead Church for ten more goats.