Rwandan schooling: then and now 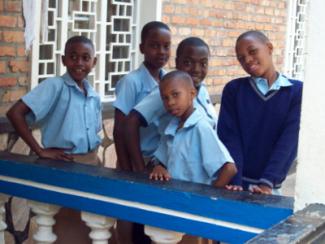 The new school year in Rwanda starts in early January. At one time, the beginning of term seemed to be a moving feast and announced only at the last minute. This is Africa! More recently things are a little more settled. We are reliably informed by our friends and the govenment website that term starts on 6th January (but that this might change). We have been sending children to school for ten years now and already have seen the older ones leaving to find work. The education system has changed much over the years and even if we aren't certain when the new term will start, there is more structure discernable as the Rwandan system has evolved into something much closer to the European model.

Ten years ago one of the biggest peculiarities of the schools in Rwanda was the wide variation in age of children in a class. The problem was that in order to progress from one year to the next, a child had to pass the year's examinations. Not everybody did this and it wasn't uncommon to find teenagers sitting in primary classes bored out of their skulls. While there were an unfortunate few who were trapped in the system, there were many, and a substantial proportion of the population, who could not afford to go to even primary school. Secondary education was more expensive again.

Much has changed since. New schools have been built to create more school places. A fixed minimum nine-year regime has been introduced. Children now complete six years at primary and at least three years at secondary before sitting national exams. The more academic children then go on to a further three years schooling and possibly even college or university. For the others, one or two years vocational training is available. Rwandan schools are still not free to all although there is some government funding available. At the end of P6 those that succeed in national exams are eligible to a bursary amounting to half of the annual fees. The catch is that the government chooses the school and the parents must find the other half. This is prohibitive to many, especially if a family has several children. For the poorest, local secondary schools exist where the fees are more modest.

Fortunately in our terms primary education is still relatively cheap. This allows us to help children into schooling that would not otherwise have the opportunity. Although there are fewer children trapped for evermore in the system, it is still the case that to get to secondary school a primary education is essential. Making that early start into P1 is crucial.