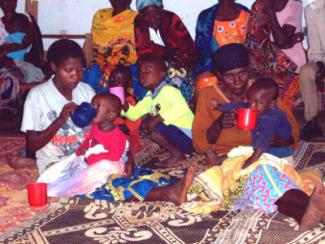 This morning was an early 4am start to visit our new porridge project at Rugende. It is still dark and the roads were quiet as we headed east out of Kigali. At Inkurunziza Rugende church a brief service starts at 5am and the porridge is served an hour later.

The reason for the early start is because many of the children receiving porridge are too young to make their own way to the project. Their mothers have no regular work and each day go out into the fields hoping to be hired for the day. Being near the beginning of the queue rather than at the end can mean the difference between being paid for the day and going home empty-handed. The other reason for serving porridge early in the morning is because a fortunate few of the children go to school which starts at 7am.

A brand new kitchen area has been built into the rear of the building where the children and their mothers meet. Each day, two of the mothers take turns to prepare the porridge and are given a small wage. The porridge is dispensed into large vacuum flasks and distributed among the children.

This is the first batch of twenty children to receive porridge at this new project. They are all under 11 years old and have all been assessed for risk of malnutrition. Heights, ages and circumference of their arms have all been recorded. The progress of each child will be monitored throughout the project.