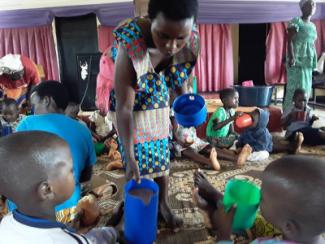 Our porridge project in Rugende was initiated in April. This semi-rural district just outside Kigali is one where under-fed children are not hard to find and the project provides a daily meal for these children. The church running the project for us organised a grand opening with local dignitaries coming along.

The first task was to identify the most needy children and to give each a medical screening. So that we can understand and quantify the impact of the project, each child was categorised according to their general health and condition.

Feeding these children is only one aspect of the project, albeit the base that everything else is built on. An important element is reaching out to the children's families and the wider community. A group of women, some who are mothers of children on the project, others willing helpers, take turns to prepare and serve the porridge each day.

It is early days yet but one lesson that has been learnt already is that it is not only the children who are short of food. If the children are hungry then so are their families. This is an issue that we need to address, but one thing at a time, we will get this project established and understand the local area better.

In the meantime, a water tank near the kitchen is planned and there is some finishing off to do on the kitchen itself. The tank will be necessary for the dry season when the rains have stopped. Another plan is to bring the children's mothers together in a self-help group.

We have been running porridge projects for several years now and each one is different. The goal at Rugende is to establish regular feeding over the next few months then expand the activities to address the underlying poverty that leads to underfed children in the first place.