Getting back into the swing of things 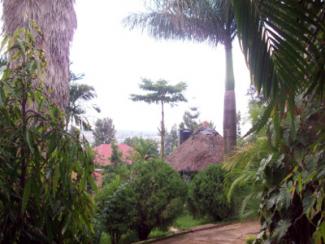 We have been coming to Rwanda for something over ten years now. The people and geography are becoming familiar to us and with each trip easing back into Rwandan life gets a little easier. Kigali is certainly bcoming familiar to us. We have long-since learnt to expect the unexpected, like the electricity suddenly disappearing or waking up to find no water in the taps as happened this morning.

On this trip our first day here was Saturday and, significantly, the last Saturday of the month. That means Umuganda - national community work day - when everything shuts down for the morning while ditches are dug and pot-holes filled in. This Umuganda is helpful because it gives us a chance to gather ourselves after a day's travel, pull our thoughts together and get our communications set up. A cold shower before breakfast helps the process. Hot water isn't common but in 20c - 30c heat it isn't missed.

We have arrived in the middle of the rainy season. The air is damp and the sky heavy with cumulus clouds which develop through the day. Usually by late afternoon the thunder and lightning have started. There has been a lot of rain lately. The tracks underfoot are soft and streams run along the roadside channels. This season the rains are late and unusually heavy which is causing problems. People were expecting to harvest crops such as beans around now after the rains had finished but the rainfall is washing the soil from the steep hillsides and destroying the produce.

Losing crops is bad enough at the best of times but for almost a year now a government spat with Uganda next door has kept the border closed to Rwandans. Historically, Uganda has been the primary source of imports for this land-locked country. Many goods, and especially processed foodstuffs, come through Uganda from Kenya. Although Rwandans are not allowed out into Uganda, the Ugandans are able to come to Rwanda to sell their goods. This has meant the price of many basic foodstuffs has doubled or more. In principle, Rwandan imports could come the long way round Lake Victoria and through Tanzania. The road network there however is not as well developed as in Uganda.

So even after a couple of days back in Rwanda we are picking up a flavour of what we will encounter as we visit our projects. There are almost certainly families which are struggling to eat. This is a pert of the world where difficulties seem to pile up on top of each other despite the resilience of the people.