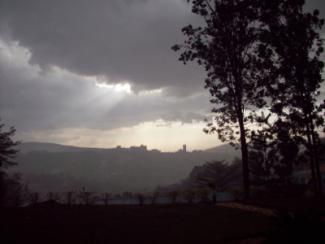 We have received news that recent heavy rains in Rwanda have caused landslides across Rwanda causing eighteen deaths. It has been reported that 79 houses and 56 hectares of crops were destroyed.

In Kigali the houses of two of the children among the group sponsored by Loanhead Church were damaged. Fortunately it does not sound as if these houses were destroyed altogether. Over the weekend the local community was helping with repairs.

Rwanda is known as the Land of a Thousand Hills and many people live on the steep hillsides. For most of the year the soil is rock-hard and similar to sandstone. When the rains come however, the ground turns to a wet sludge not unlike the beach where it meets the outgoing tide. Many houses are built without concrete foundations and are susceptible to landslides.

Aside from the immediate hardship of lost homes, the effect of these heavy rains will be felt for many months. Crops have been lost and this will immediately push food prices up. Grass for livestock grazing has also been washed away meaning that later in the year animals will go hungry.